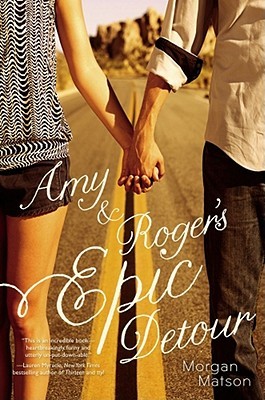 WHAT IT’S ABOUT: Amy Curry is not looking forward to her summer. Her mother decided to move across the country and now it’s Amy’s responsibility to get their car from California to Connecticut. The only problem is, since her father died in a car accident, she isn’t ready to get behind the wheel. Enter Roger. An old family friend, he also has to make the cross-country trip – and has plenty of baggage of his own. The road home may be unfamiliar – especially with their friendship venturing into uncharted territory – but together, Amy and Roger will figure out how to map their way.
MY THOUGHTS: There is just something so perfect about a Morgan Matson novel. You can expect awesomeness, and it will be delivered. She manages to do Contemporary Romance perfectly – there’s no insta-love, and her character’s are each flawed and struggling in their own ways. In Epic Detour, we have Amy Curry – fresh off the loss of her father in a car accident that she is convinced was her fault; and Roger Sullivan – who is still reeling from a recent breakup. They are thrown together on a cross-country road tour, and of course, they both get more than they bargained for.
For the past month, Amy has been living alone – her father is gone, her twin brother is in rehab, and her mom picked up and moved to Connecticut – which is the destination of the road trip with Roger. She is horribly depressed, blaming herself – wallowing in a pool of self-pity, and basically has become an empty shell of herself. She’s abandoned all of her friends, including BFF Julia who is officially giving up on her.

“The best discoveries always happened to the people who weren’t looking for them.”

Roger is back in California from Colorado, where he attends college, and is heading to Philadelphia to spend the summer with his father. He was dating Hadley Armstrong – the pretty girl who’s M.O. is to leave guys high and dry, with no explanation of why it went bad. She’s basically not a nice girl. But Roger needs closure – and wants her back. He agrees to this road trip thinking he can drive to Colorado and win Hadley back.
Day One – Amy and Roger decide to throw her mother’s four day itinerary out the window, and make their way from California to Colorado, stopping to see the sights. What they find on the way is more than either thought they’d get.
***
I cannot tell you how much I seriously HEART this book. It is so perfect, well, except for the end – I want MORE! Please, write a sequel, Morgan, I beg of you! I need to know where our characters end up after this.
I picked this book off my shelf looking for a light read, which I did and didn’t get. Sure, there’s the contemporary part of this book, but there are some pretty hefty topics in this book too – death, addiction, breakups, and finding yourself – and your way out of grief and depression. Matson does this is such a wonderful way too, mixing the good with the bad. You can feel Amy or Roger’s despair one second, and the next you’re laughing. It’s wonderful!
WOULD I RECOMMEND IT? Oh my gosh, YES! In a heartbeat, I would recommend it to any Contemporary Romance lovers looking for a five-star read.
Happy Reading,
Laura
Leave a comment
Contemporary, Death, Family, Four Star Rating, Friendship, Loss, Morgan Matson, Review, Romance, Second Chance Summer, Young Adult 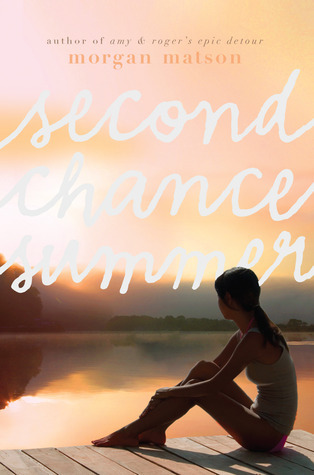 WHAT IT’S ABOUT: From the Flying Start author of Amy & Roger’s Epic Detour, a powerful novel about hope in the face of heartbreak.
Taylor Edwards’ family might not be the closest-knit—everyone is a little too busy and overscheduled—but for the most part, they get along just fine. Then Taylor’s dad gets devastating news, and her parents decide that the family will spend one last summer all together at their old lake house in the Pocono Mountains.
Crammed into a place much smaller and more rustic than they are used to, they begin to get to know each other again. And Taylor discovers that the people she thought she had left behind haven’t actually gone anywhere. Her former best friend is still around, as is her first boyfriend…and he’s much cuter at seventeen than he was at twelve.
As the summer progresses and the Edwards become more of a family, they’re more aware than ever that they’re battling a ticking clock. Sometimes, though, there is just enough time to get a second chance—with family, with friends, and with love.
MY THOUGHTS: Rarely will I ever pick up a book that deals with the C-word… Cancer. It’s a topic way too close to home for me, as I know it is for many people. I like my stories upbeat and happy, but this one just called out to me and I decided to go ahead and read it.
What I liked about the book, is that there was equal parts fluff and heavy stuff. Even though it’s technically a beachy summer read, I needed a break from the doldrums of this snowy, cold winter and joined Taylor Edwards and her family on their vacation in the Pocono Mountains in Pennsylvania.
I really liked the growth in Taylor’s character throughout the book – even though there were moments where she drove me crazy! She was likeable enough, but she just annoyed me at times. Throughout the beginning of the book, we learn that something happened between Taylor and her first boyfriend, Henry, and best friend, Lucy. I spent all this time thinking, oh man! What could she have done to make them hate her this much? And then when I found out I was like, oh. That’s it? So I think that was a little let down.
Another enjoyable aspect of the book is watching the Edwards family come together and change into something they never had been before. They all rally around Mr. Edwards to give him the best last few months of his life, and learn things about each other that they had never known before. Out of grief comes a sense of togetherness.
The friendship between Taylor and Lucy was fun to read about, and once they talk again they are able to pick up right where they’d left off all those years ago. The relationship between Henry and Taylor is sweet and endearing. They truly make a great, cute couple but I definitely think Warren and Wendy getting together is even sweeter!
Overall, if you’re looking for a quick, cute summer (or a break from winter) read, I’d recommend this one at will.
SIMILAR READS: Unbreak My Heart by Melissa C. Walker | In Honor by Jessi Kirby | The Story of Us by Deb Caletti | Being Friends With Boys by Terra Elan McVoy | Waiting by Carol Lynch Williams | Breaking Beautiful by Jennifer Shaw Wolf | Keep Holding On by Susane Colasanti | Kiss the Morning Star by Elissa Janine Hoole | First Comes Love by Katie Kacvinsky
Happy Reading!
Laura