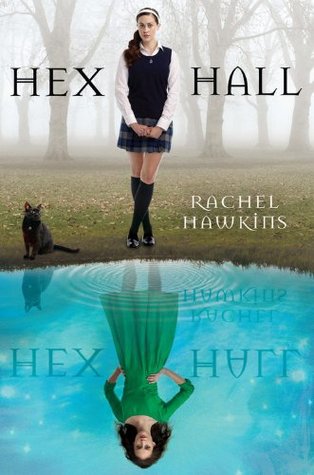 HEX HALL
SERIES: Hex Hall | OTHER BOOKS IN THE SERIES: Hex Hall #1 Demonglass #2 Spell Bound #3
AUTHOR: Rachel Hawkins
PUBLICATION INFORMATION: March 2nd 2010 by Hyperion Books
EDITION: Paperback, 323 pages
ACQUISITION: Own
CATEGORIES: Hex Hall Series, Young Adult, Review, 4 Stars, Fantasy, Paranormal, Magic, Vampires, Witches, Faeries, Shapeshifters, Supernatural, Demons, Rachel Hawkins, 2014 Read
RATING: 4.00/5.00 | GOODREADS RATING: 3.99/5.00
ADD TO GOODREADS
WHAT THE COVER SAYS: Three years ago, Sophie Mercer discovered that she is a witch. Her non-gifted mother has been supportive, consulting Sophie’s estranged father – a warlock – only when necessary. But when Sophie attracts too much human attention for a prom-night spell gone horribly wrong, it’s her dad who exiles her to “Hex Hall”, an isolated reform school for wayward Prodigium, a.k.a. witches, fairies, and shapeshifters.
By the end of her first day, Sophie has three new enemies, a futile crush on a warlock, a tag-along ghost, and a vampire roommate. Worse, Sophie soon learns that an unknown predator has been attacking students. As a series of blood-curdling mysteries converges, Sophie prepares for the biggest threat of all: An ancient secret society determined to destroy all Prodigium, especially her.
MY THOUGHTS: I really enjoyed this book more than I expected to! I first picked this book up from the library when it first released, and had trouble getting into it, and ultimately didn’t finish it. But then the reviews started pouring in, and some of my favorite fellow bloggers really enjoyed it and were saying great things about it. So, I bought it when it released in paperback.
Sophie was a likable character because it was easy to sympathize with her when she starts learning all of the secrets that have been kept from her all of her life – important secrets that probably could’ve really been useful to know! When she attempts to help a girl at the prom get her dream date, the spell goes horribly wrong – landing Sophie at Hecate ‘Hex’ Hall as punishment.
There weren’t many elements of the story that I didn’t like. I really enjoy that there are many different paranormal creatures – Prodigium – at Hex Hall, but I feel like there were too many to really get to know any one group more than just on a superficial level. I am really hoping that in the next two books we get to know more about the workings of the faeries, shifters and witches. We get a main story on how they were “Created” from angels/fallen angels, but I did want more background.
The pacing of the story moved quickly, and there was always some type of action or event occurring on each page. I liked the dynamics of all of the characters, each was different and individual and held their own. I really enjoyed Jenna’s character, and how she and Sophie work together as roommates-turned-friends.
I didn’t like how secretive everyone was; however. It wasn’t just Sophie’s parents (including her Warlock father whom she’s never met) but Ms. Casnoff, the head of Hex Hall as well. Nobody wanted to tell Sophie who she truly is, her family lineage, or the dangers that face her now and in the future. I feel like keeping everything a secret was even more detrimental, than had everyone been open with her. I cannot imagine the feeling of finding out these secrets about yourself and your family from other students, especially when you’re already new and feel out of place.
The aspect of the book that I really liked, was the ghost of Sophie’s great-grandmother, Alice, who takes it upon herself to teach Sophie how to protect herself. But things aren’t always as they seem, and when things start to get a little weird, Sophie starts to piece everything together and we are left with a pretty crazy cliffhanger. I do like that Hawkins isn’t afraid to kill off characters and not give them happy endings, but I’m curious to see how the series proceeds now without a few key players.
SIMILAR READS: AWAKE AT DAWN (Shadow Falls #2) by C.C. Hunter | THE GHOST AND THE GOTH (The Ghost and the Goth #1) by Stacey Kade | Paranormalcy (Paranormalcy #1) by Kiersten White | SHADE (Shade #1) by Jeri Smith-Ready | ONCE A WITCH (Once a Witch #1) by Carolyn MacCullough | FIRESPELL (Dark Elite #1) by Chloe Neill
Happy Reading!
Laura
Leave a comment
April Genevieve Tucholke, August 2013 Release, demons, Fantasy, Gothic, Horror, http://schemas.google.com/blogger/2008/kind#post, Paranormal, Romance, Young Adult

WHAT IT’S ABOUT: You stop fearing the devil when you’re holding his hand…
Nothing much exciting rolls through Violet White’s sleepy, seaside town…until River West comes along. River rents the guesthouse behind Violet’s crumbling estate, and as eerie, grim things start to happen, Violet begins to wonder about the boy living in her backyard. Is River just a crooked-smiling liar with pretty eyes and a mysterious past? Or could he be something more? Violet’s grandmother always warned her about the Devil, but she never said he could be a dark-haired boy who takes naps in the sun, who likes coffee, who kisses you in a cemetery…who makes you want to kiss back. Violet’s already so knee-deep in love, she can’t see straight. And that’s just how River likes it.
Blending faded decadence and the thrilling dread of gothic horror, April Genevieve Tucholke weaves a dreamy, twisting contemporary romance, as gorgeously told as it is terrifying—a debut to watch.

MY THOUGHTS: Horror is one of those genres that I don’t read enough of, but when I do, I really enjoy them. Being described as a ‘thrilling dread of gothic horror… a dreamy twisting contemporary romance…’ sounds like it’s going to appeal to lovers of gothic horror novels and paranormal, as well as those who enjoy contemporary and romance. I’m very curious to see how this one is, especially since it’s already got pretty good reviews on Goodreads.
What are your thoughts on this one? Let me know in the comments below!
Happy Reading!

What the Back of the Book Says: In a city of daimons, rigid class lines separate the powerful from the power-hungry. And at the heart of The City is the Carnival of Souls, where both murder and pleasure are offered up for sale. Once in a generation, the carnival hosts a deadly competition, Aya and Kaled would both face bleak futures – if for different reasons. For each of them, fighting to the death is the only way to try to live.
All Mallory knows of The City is that her father – and every other witch there – fled it for a life in exile in the human world. Instead of typical teenage life full of friends and maybe even a little romance, Mallory scans quiet streets for threats, hides herself away, and trains to be lethal. She knows it’s only a matter of time until a daimon finds her and her father, so she readies herself for the inevitable. While Mallory possesses little knowledge of The City, every inhabitant of The City knows of her. There are plans for Mallory, and soon she, too, will be drawn into the decadence and danger that is the Carnival of Souls.
My Thoughts: The incredible world-building that made me fall in love with Marr’s Wicked Lovely series is what hooked me from the beginning of Carnival of Souls and kept me going to the last page. I was absolutely blown away by The City, the world that Marr created that is inhabited by daimons. The story alternates between Aya, Kaleb, and Mallory. I didn’t really connect with the characters as much as I’d hoped. If any character stood out to me, it would be Kaleb. He was the most three dimensional with tons of emotions and strength. He was willing to do anything to keep himself and his packmate, Zevi, safe and his love for Mallory is tangible.
Mallory wasn’t a character I could really connect with. She was kept in the dark as to who her father is, and what her true heritage is. That part is understandable, but the scenes with Mallory just really didn’t do anything to make me like her. Aya was a decent character, I liked her and could get into her story. She has tons of secrets and there is so much going on that isn’t within her control.
The plot of the story was completely unique and not like anything I’d ever read before, which kept me motivated to devour the entire book as quickly as possible. I did find a few things predictable, and there wasn’t a whole lot of action other than the fights in the Carnival of Souls, which was the first half of the book. I felt that the book lost just a tiny bit of steam in the second half. There are so many themes and elements that are different than most other books so it stays fresh and new through the entire book. I felt that the book deserved more than a 3 star rating, because I really did enjoy it. I didn’t love it enough for 4 stars though, so I felt that a 3.25 rating is perfect, even though I try not to give out odd ratings! I love the cover of the book and everything about it, and I’m excited to see what happens in book #2.
If you liked this, read this: The Gathering Dark by Christine Johnson | Loki’s Wolves by KL Armstrong | The Madman’s Daughter by Megan Shepherd | Paper Valentine by Brenna Yovanoff | Sorrow’s Knot by Erin Bow
Happy Reading!